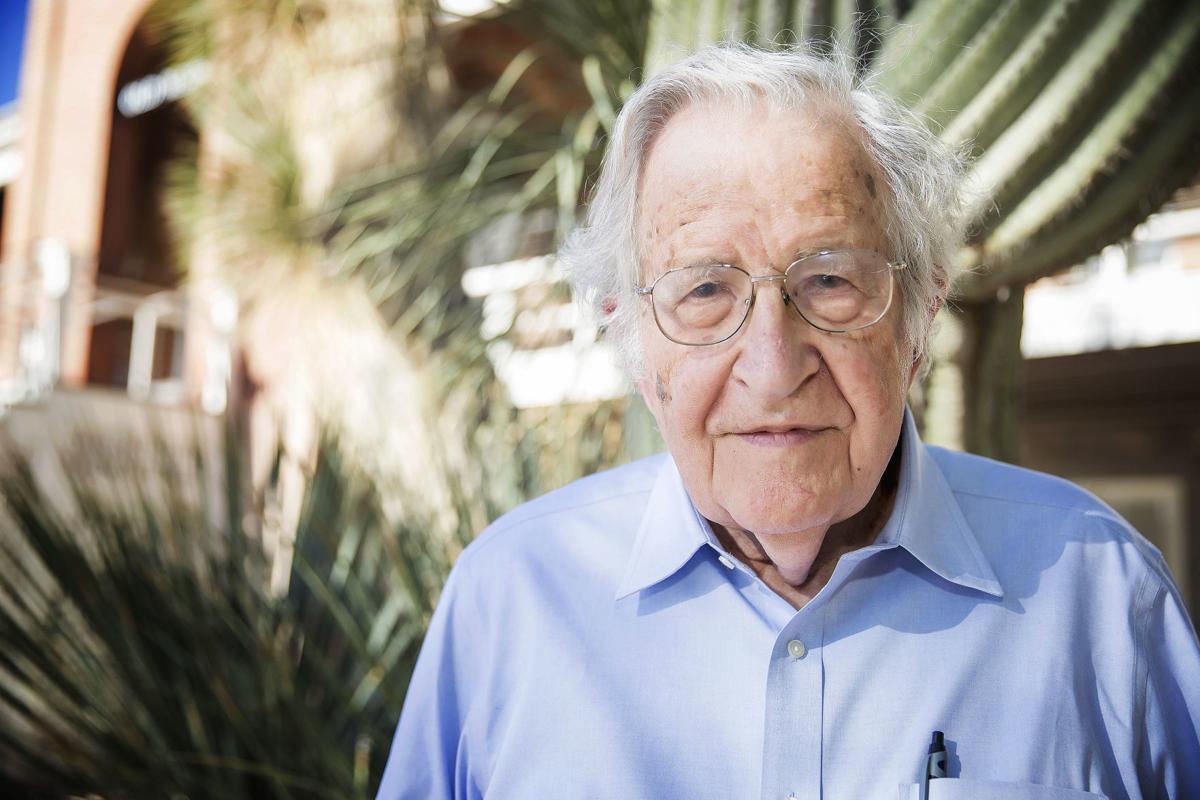 Despite a report that he makes $750,000 for teaching at the UA, linguist Noam Chomsky actually will receive $187,500 total over three years.

You might have heard the outrageous news about the University of Arizona last week.

The headline at the Judicial Watch website pretty much says it all:

Of course, the writer was talking about our state university right here in Tucson, the UA. And that radical octogenarian linguist? It could only be one person — Noam Chomsky.

Judicial Watch used public records from the UA on how much it has paid Chomsky to build the story. After the piece was published Tuesday, the conservative news site The Daily Caller picked up the story, too. It went around. Readers sent me the link.

I get that people don’t like Chomsky for his left-wing politics, but that didn’t bother me so much when he was hired at the UA in 2017, because he is, as the phrase goes, “the father of modern linguistics.” He revolutionized how linguists view language, showing how the structure of language is innate in human minds.

That didn’t make him, at 89 years old, worth a quarter-million a year to do part-time work at the university, though. That would be an outrage.

So I checked it out.

It turns out that is something Judicial Watch failed to do – check it out.

What the writer claimed is that Chomsky is a “extreme leftwing propagandist” getting paid close to a million dollars over three years in an “outrageous deal.”

“The money comes from tuition dollars, grants, and other funds generated by the public institution,” the story says.

The article is unsigned, by the way, which is a good thing for whoever wrote it. That’s because it turns out the story is wrong in most of its important details.

Most crucially, Chomsky is not being paid $250,000 per year. The story even posted the documents that make this clear. Chomsky’s original contract says he is being paid “at 0.250 FTE, with an annualized academic base salary of $250,000.”

I suppose if you’re not familiar with the abbreviation FTE, which means Full-Time Equivalent, you might not understand that this does not mean he gets paid $250,000 per year. It’s saying he gets 0.25 times that, or $62,500.

What appeared to be a $750,000, three-year contract is actually a $187,500 commitment over three years. Actually, pretty cheap for an academic star.

What makes that an especially good deal for the taxpayer? Chomsky’s pay here doesn’t come from taxpayers. The Agnese Nelms Haury Program and other donors are underwriting Chomsky’s salary.

He has also officially increased his workload, from quarter-time to half-time.

“The amount of effort was double what he was contracted for, but he didn’t want any more money,” UA spokesman Chris Sigurdson said.

Chomsky teaches a course per semester, advises some graduate students and does on-campus public lectures that tend to be well-attended. While Chomsky has strong detractors for his political views, which have included initially supporting leftist strongman Hugo Chavez in Venezuela, for example, he also has legions of devoted followers of both his linguistic work and his politics.

In early 2017, when Chomsky offered his first course at the UA before the three-year contract, the Star profiled a 63-year-old restaurateur from Bakersfield, California, who signed up for the course. He traveled 12 hours each way weekly to attend.

I emailed Chomsky to ask him about the contractual situation, but he did not get back to me by my deadline.

What happened after Judicial Watch published the story says a lot about the growing cottage industry surrounding alleged liberal outrages on college campuses. Despite being made aware of the errors in its story, Judicial Watch changed nothing. The story was still up on the Internet, unchanged, as of Saturday afternoon.

The Daily Caller, which had followed the Judicial Watch piece, later corrected the original misinformation. That’s to their credit.

But why did the story catch wind in the first place? People have been primed to look for liberal outrages on college campuses, to take a scattering of leftist excesses and universalize them to all universities. This trend took off because of real outrages – speakers being shouted down and the like – but the coverage now exists also to reinforce the preconception and stoke outrage.

There is substantial evidence from surveys that young Americans, including college students, support free speech at about the same rate as other Americans. So perhaps scattered, disturbing incidents of speech-suppression on campus are not as widespread a threat as often alleged.

The Judicial Watch piece also quoted Bevan Olyphant, a former Green Beret who has taught a leadership course in the Honors College. The story says Olyphant “said this is the response he got from the president of UA when he requested that the university bring in conservative speakers: ‘We can’t do that! We would have a riot.’ ”

That certainly would be outrageous, if the president had said conservative speakers couldn’t come to campus because there would be a riot.

But then there’s the inconvenient fact that Charles Murray, the controversial and conservative author of The Bell Curve — who was confronted by a mob on a Vermont campus last year — and Dinesh D’Souza, the liberal-hating provocateur, spoke on the UA campus in spring semester, 2018. They spoke in Tucson without incident.

It’s almost as if the Judicial Watch piece — and by extension some of the cottage industry of reporting liberal outrages on campuses — isn’t so interested in informing as inflaming.

While filling vacancies has become easier, hundreds of Tucson-area classrooms continue to be led by people without the proper training.

Steve Kozachik: Company that made toxins in Tucson's water should pay

Tucson should do more than close wells after finding contaminants.

John D'Orlando: My first year as the Star's publisher and president

Tucson is a welcoming and vibrant community.

Search planned after 2 human bones found in the Chiricahua Mountains

The House Education Committee voted Monday to advance the bill, saying it would promote balance.

Despite a report that he makes $750,000 for teaching at the UA, linguist Noam Chomsky actually will receive $187,500 total over three years.